Hurricane.
Last week there was a hurricane around Bergen - to be honest it was not that terrible.
I was at home, talking to a friend of mine about everything and nothing at all, whan suddenly he asked me:

But, what is the meaning of hurricane in Norwegian?

I had a lot of thoughs swirling in my head. There is a Swedish band that released an album called "Orkan", so it has to have a meaning connected to the Scandinavians roots, something really epic; or so I thought.
I go and reach my Norwegian Etymology Dictionary only to discover that: 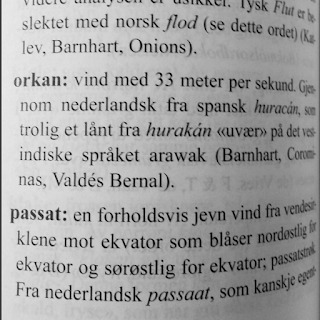 The word hurricane comes from Dutch (orkaan), that has loaned the word from Spanish and Spanish (huracán) has loaned the word from the Arawak language in the Caribbean (juracán).
The world is a really small place after all.
Most of the European languages use the word "hurricane" to describe the strongest winter storms:
In German is Orkan, in Italian uragano, in Polish Orkan, in French ouragan, and so on.

The meaning is, in fact, a little bit epic, because when the storm god Juracán was upset, he used to send strong wind and massive rain on the Taino population.

The god reminds me of Set (from Egyptian mythology), Zeus (Greek mythology), Thor, Odin and Jupiter (Roman mythology). There could be other gods with more similar nuances, but unfortunately my knowledge on mythology is a little bit rusty at the moment.


All this loan-word process leads to a consideration: before we got the word "hurricane", were there no hurricanes at all in Europe? Did not we have the necessity to define this kind of weather?

If anyone has the answer, please let me know.